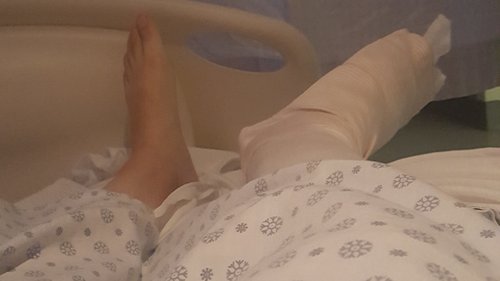 Posted at 20:10h in Americas by Samah 0 Comments
0 Likes
Share

The morphine didn’t affect me—my screams drained the blood from the nurses’ faces and gained looks of sympathy from neighbouring people as the doctor straightened my broken leg to bandage it.

A few painful x-rays later, it was confirmed: a fractured tibia and fibula. Instead of a cast, I would receive surgery around noon the next day to nail a metal rod along my fractures to heal my bones. I stayed in the hospital overnight.

A question I was constantly asked by nurses and doctors: you don’t have anyone here with you!?

Nope. I was solo.

A Few Hours ago

Ecstatic and a bit nervous. It was my first solo trip and I was excited to tackle the British Columbian mountains, hiking trails and cities on my own.

I was enjoying the beautiful Fall foliage. That morning, I visited Brandywine Falls in Squamish and hiked the Cheakamus Lake trail in Whistler. The rain didn’t dampen my mood. When the sun finally did peak, the orange, red and yellow maple leaves basked gloriously in its yellow glow. The green grass glistened and the air smelt of pleasant, dewy petrichor. It was surreal.

Upon my return from the Cheakamus Lake hike, I thought about paying a visit the nearby Train Wreck Trail. But I figured I’d return to Whistler and set on my 2 hour drive back to my Airbnb in Vancouver. I picked up a rice bowl from the Freshii in Park Royal, a Vancouver shopping centre. Chewing spoonfuls of rice while I sat on my bed, I thought: what should I do next? I was feeling tired but wanted to find a spot to photograph the sunset. I was in BC for a week and was eager to make the most of it so I decided to visit the lighthouse at Stanley Park.

I left my Airbnb a bit late—the sun had started to set and with traffic, it was a 30 minute drive to the lighthouse. I was following Google Maps and missed a turn. Instead of seven minutes away, the lighthouse was now 17 minutes away. The sky was going from a mixture of pink, orange and purple to blue. I didn’t drive 30 minutes just to miss the sunset.

I was driving along Stanley Park and came across a side view of Lions Gate Bridge. It was lit up against the darkening sky. It would make a beautiful shot. I parked my car, grabbed my Nikon camera and tripod and started down a small grassy hill.

It happened too quickly: I fell on the spot. My right knee bent and I fell in a strange sitting position. There was this odd pain sensation in my right leg; I’d never felt it before. I couldn’t get up. My first thought: Oh crap, I broke my leg! There was a slight painful jabbing sensation in my right calf and I thought my bone was broken to the point where it was poking against my skin. I couldn’t muster a look. I thought of crying out for help, but made a split-second decision to frantically search for my phone, dial 911 and yell “I think I broke my leg!!!” at the dispatcher.

The ambulance drove past me twice until they finally located me. It was dark. People walking by stared at me. It must’ve looked odd for someone to be laying on their side, propped on their left elbow in the middle of grass, on a chilly night. I shivered feverously.

I was taken to the trauma bay in St.Paul’s hospital. Nurses ordered me to undress and wear a hospital gown. I’m telling you now—removing skinny jeans from a broken leg isn’t something I’d wish on my worst enemy. The nurse refused to cut them because they were cute and I had already gotten the top of my jeans down to my ankles. I doubt I’ve ever screamed so much in my life.

My surgery was bumped and didn’t happen during noon the next day. I was second on the emergency list. The nurse told me I’d have it early morning the next day.

I squinted my eyes open. I was being rolled out of the surgery room in a stretcher. Post-op is a blur. All I remember is telling a nurse I felt run over by truck and being deathly exhausted.

I was discharged from the hospital the next day after a physiotherapist deemed my use of crutches okay. Back at my Airbnb apartment, I stayed in bed and was fortunate to have extremely attentive and helpful Airbnb hosts. They carried me up and down the stairs since their three-floor apartment had no elevator. They paid me visits to the hospital to bring me crutches, extra clothing and most importantly—a phone charger.

My return to Toronto with a broken leg was easier than expected. I had wheelchair service throughout Vancouver International Airport and Toronto Pearson Airport. I paid an extra $20 for a seat with extra leg room on Air Transat. The seat didn’t actually have extra legroom. The two people in my row were kind of enough to sit elsewhere so I could keep my broken foot elevated on their seats.

There you have it. Two days spent exploring BC and four days in the hospital. Those two days were wonderful and I miss the beauty of province. I’m hopeful to return next Fall (perhaps move there).

Have you ever gone through unexpected experiences during a trip?