Moonbean Chocolate | Made in Uganda 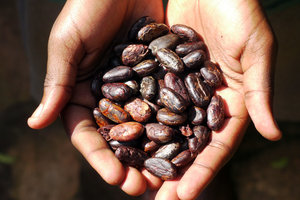 10 Aug Moonbean Chocolate | Made in Uganda

Posted at 19:07h in Africa by Samah 0 Comments
0 Likes
Share

As Denise leaves for BRAC, James sorts, then roasts cocoa beans. They will be grinded once cracked and winnowed—a process to remove the outer shell of the cocoa bean to leave only the cocoa nibs—then put into the refining machine. He begins to temper yesterday’s batch of chocolate liquor, which has been refining since. Once tempered, he will mold the chocolate into bars and package them. Returned from work, Denise completes administrative tasks and provides a debrief of what tomorrow will look like. James usually cooks dinner.

Harvest time hits monthly. This requires a trip to the cocoa farms in Bundibugyo, a district six hours west of Kampala. Improving fermentation or bean selection are hot topics with the cocoa bean farmers.

What’s one thing the husband and wife duo have learned from running a social chocolate-making business in East Africa? They’ll frequently be on their toes.

Where it all started: Bundibugyo, Uganda

Bundibugyo doesn’t see as many tourists as some districts of Uganda, however it does host some attractions, such as Semaliki National Park. The region is comprised of four tribes. It has been the scene of conflicts as recently as the 2016 Local Council elections. Due to its proximity with the Congo, and the difficulty of crossing the mountains, the people of Bundibugyo have been isolated from Ugandan culture. They maintain many of their traditional beliefs and much of their ancestors’ way of life. The region is now peaceful and the growth has seen positive developments in the economy. With increased access to wealth, however, come social problems, such as underage pregnancy, high school drop-out rates, and a prevalence of AIDS and other diseases.

James and Denise spent time between the library, the local teaching college, the cocoa factory and a restaurant called Hotel Vanilla, where they accessed a mildly disruptive internet connection. Hotel Vanilla gave them respite from the bustle and curiosity of village life. They explored the hills, played guitar, and slacklined with the local children.

The Calm Before the Storm

Tasked with establishing a community library in the Bundibugyo District, James, a social responsibility manager for a Ugandan cocoa exporter, spent his days surrounded by cocoa trees; the scent of fermented and drying cocoa beans wafting in the dusty air.

The labour of cocoa beans farmers was noticed. They would remove the beans from the pod, box them for fermentation and shield them with banana leaves. Left to ferment, the beans were turned over every four to five days, until the fleshy pulp dissolved, allowing them to develop a rounded flavour. The beans were then dried on racks to reduce moisture content—a process worked around rain that could take up to two weeks. The dried beans were delivered to exporters.

James had his ‘ah ha’ moment once he realized most cocoa products exported from Uganda were in raw, unprocessed form. Almost no one was importing chocolate made in Uganda.

Through discussions with Denise, the business idea of creating Ugandan-made bean-to-bar chocolate emerged.

Chocolate-making seemed simple…. in the beginning. After reading the basics of chocolate-making online, James and Denise plunged right in. They roasted cocoa beans, cracked and winnowed them by hand and ground them into a rich, brown liquor of goodness while sweetening with sugar.

There was one problem.

They didn’t have a means to refine the chocolate liquor into a smooth chocolate paste. But after four years of Uganda-living, James and Denise are accustomed to implementing innovative solutions to their problems. And that’s what they did—with a meat grinder. The meat grinder was used to refine the chocolate paste, but after 20 attempts at hand-cranking the device, there was no apparent improvement. The chocolate was tempered anyway, and shaped into chocolate bars. A taste test ensued with farmers and staff. It was delicious.

While ideal for cocoa farms, Bundibugyo threw challenges at the chocolate-making process. Uganda is seldom routine so transport delays, power outages and an endless battle against dust—the least desirable ingredient on chocolate, were usual.  The delicate fermenting process required cooler temperatures, so working early mornings and late nights were typical.

Chocolate-making brought more enlightenment than chocolate-making itself. The constant attention to details and being kept on their feet, James and Denise found, were one of the pleasures of life in Africa.

Fruit of the Labour

And milk chocolate? It’s in the works. Denise and James are testing different flavours—coffee and cocoa nibs, nuts and dried fruit.

They hope to concoct and release new chocolate flavours each month, beginning 2018.

What’s in a Name?

Moonbean chocolate. The name transpires from Bundibugyo. Uganda, particularly because it’s embedded in the foothills of the snow-capped Rwenzori Mountains. Famously known to Ugandans as the Mountains of the Moon, the Rwenzori Mountains claim the third highest peak in Africa. The glacier waters from the mountains feed the Nile River and cocoa tree plantations on the lower slopes. It would only make sense to say the farmers farming those cocoa beans are growing moonbeans.

Moonbean chocolate ingredients are only sourced in East Africa.

From the eco-friendly awareness raising initiatives with farmers, through the production process, moonbean chocolate tries to embed environmental consciences into each chocolate-making stage.

The packaging envelope is made of recycled paper and banana fibre, with natural food-safe dyes, making it safe for composting and recycling. It is produced by a small company, Rafiki, that supports local women with livelihoods in training and craft skills.

Future green goals aim to provide farmers with cacao seedlings and shade trees to prevent deforestation, land erosion and promote multipurpose farming. Cacao trees avoid direct sunlight, and the shade trees, such as mango, avocado and banana, will also offer tasty edible by products. For a region covered with fertile land, Bundibugyo is incredibly food poor and crop diversification is something they are actively promoting.

…And So Does Philanthropy

Described as a social business, moonbean chocolate actively supports local organizations working towards a shared goal of poverty alleviation through financial literacy training, healthcare, and education initiatives. They pay attention to these areas:

With more job creation and more money remaining in Uganda, the additional income cocoa farmers and workers generate can be invested into their children’s education, and be used to support grass-roots development initiatives in their communities. Additionally, moonbean chocolate envisions a facility where it can guide school-groups, and other would-be chocolate makers, in the process of bean-to-bar chocolate making. James and Denise are developing a cross-curricular syllabus for Ugandan primary school-aged children focusing on cocoa—the history, geography, science and art of chocolate-making.

A severe accident or illness for cocoa bean farmers often leads to poverty. Moonbean chocolate aims to prevent such a scenario by offering access to healthcare schemes and working with local CBO/NGOs to sensitize the communities they work with.

Farmers are provided with training and education on current agricultural best-practices to increase crop yields, improving methods of fermentation, as well as working practices, to maximize their rewards.

Moonbean chocolate developed a simple philosophy towards giving back to Uganda: trade, not aid.

It’s a unique perspective. Uganda has taken great leaps to reduce poverty and although abundant in natural resources, Uganda lags in areas like improved sanitation, access to electricity, educational progression and child malnutrition. However, donations aren’t necessarily needed. A more sustainable way to address the cause of poverty is through income increase of Ugandan workers. This provides economic benefits and adds value in Uganda by using a business model that empowers African farmers and their communities through trade and not aid.

In stage one of establishing their social business, James and Denise have launched a Kickstarter to fund moonbean chocolate ingredients, register their company in Uganda and develop more eco-friendly packaging material. They intend to offer farmers training sessions to increase cocoa bean harvest quality. The meat grinder has been replaced with a Spectra 11—an appliance actually made to refine chocolate paste.

Moonbean chocolate is an ambitious undertake, with a hope to inspire other cottage industries to add value to crafts and commodities in East Africa. Once they prove that a ‘production in Africa’ business can be successful and sustainable, they’re optimistic to see many more entrepreneurs following suit.

Disclaimer: These links are provided as a convenience and for informational purposes only; they do not constitute an endorsement by God & Wanderlust of any of the products, services or opinions of moonbean chocolate. God & Wanderlust bears no responsibility for the accuracy, legality or content of the external site or for that of subsequent links.