Posted at 03:21h in Americas by Samah 0 Comments
0 Likes
Share

An iconic American city, Seattle surrounded by mesmerizing mountain-scapes of Mt. Ranier, Mt. Baker, Mt. Olympus and the rest of the Cascade Range. Seattle is famous for start-up companies, Amazon and all things tech. The city has an appeal despite the visible crackheads and sheer homelessness apparent by the tents propped in certain parts of the city.

Seattle was a spontaneous trip from Portland. Portland grew boring and I was increasingly wary of the strange locals. No research was done on Seattle, but I was in the pacific northwest already, so close to Washington, and I thought why not?

Crime rate statistics in different areas of Washington whirl past my eyes while I search for an Airbnb. I cut my Portland Airbnb booking short, book a place in Burien, 20 minutes south of Seattle, after some issues with my initial Airbnb booking. The host’s dog dies so it's cancelled last-minute. Burien’s crime rate is exorbitant, but the Airbnb reviews are good. I mean, what are the chances of meeting a Ted Bundy on my short, five-day Seattle trip anyway (just kidding).

To be honest, the west coast does freak me out a bit because of the drug problem. I was craving dessert one late night in Vancouver, and decided to buy some non-weed laden desserts at a pot cafe. However, Google presented me with a macaron and chocolate cafe last minute – open late and more enticing. Afterwards I found out that the pot cafe was in East Hastings, Vancouver’s drug capital. It’s important to maintain cautiousness when travelling alone, I’ve since learned.

Seattle is safe for a female to be out solo as the number of normal people outnumber the crackheads. Druggies are terrifying. One beckoned me to ‘come here’ in a low, raspy voice while him and another man stood inside a building crevice in Pioneer Square. I picked up my pace only to realize the woman in front of me walking oddly and saying something. Also on drugs. I believe they’re mostly harmless even if you do come across them, speaking from the little experience I have of course.

The places in Seattle listed below are completely safe for solo female travellers. They made me realize what fun Seattle can be. It’s now one my favourite cities!

I recommend a car rental for extra freedom, especially if your accommodation is further from downtown Seattle, like mine was. Seattle driving is simple. But don’t speed in Washington. I end my Seattle trip with a beautiful, mint green speeding ticket of USD $320 by an officer sitting watchfully on his motorbike on the side of the highway.

All of these places are in close proximity and classic to Seattle. Pike Place Market sells a range of items. Sort of like a multi-level flea market meets a farmer’s market, except indoors and sophisticated. A plethora of open food markets and cafes line the cobblestone street, which include fresh seafood and produce, to local handmade artisans and unique crafts and fashion.

Pike Place Market has a multi-level indoor paid parking lot. Once parked here, it’s easy to visit many of the other places on foot.

Disgusted, but intrigued nonetheless, I watch people chew hard on their gum and then pull a bit out of their mouth to slowly stick it onto the red brick ‘gum wall’. Colourful gum pieces of others’ who did the same embellish both walls in the alley. They do this while someone records them for social media purposes. When I think of it, I'm still grossed out.

I am a basic Starbucks drinker. Don’t ask me why, I know I’m overpaying. I’ve bought into the lifestyle Starbucks has marketed and need to get myself out. Seattle, the birth city of the popular coffee chain, has a very traditional-looking Starbucks in Pike Place Market that Starbucks (not going to say coffee) lovers can visit. Apparently, this isn’t the first Starbucks location. The first one is actually down the street, but you know, seeing a Starbucks café with one of its older designs is pretty neat.

I guess you want more of Starbucks at this point.

I wander from Pike Place Market to explore more of the city on foot and stumble upon the Starbucks Reserve 20 minutes later.  It’s as beautiful inside as it is on the outside.

Upon entry, Starbucks merchandise, from apparel to water bottles and dish-ware, are to your right, and a café with tables beyond that, fully stocked with alcohol. To your left is a large counter, and the centre decorated beautifully with different coffee beans in large cylinders. A long lineup winds around the counter, as people wait to place their order. It’s a bougie Starbucks with different menu items than what is typically found at a regular Starbucks. Couches, tables and chairs line against the left wall. Beyond the counter is a short staircase that goes down to men, dressed in jeans shorts and brown overalls and conductor caps, roasting beans in a large vat. They show how Starbucks grinds its coffee beans.

It’s a warm, happy experience I recommend to any solo woman!

The waterfront contains a collection of lively piers and a large number of tourists for good reason. There are many seafood restaurants, souvenir shops and The Seattle Great Wheel, a Ferris wheel, on pier 57, which is the tallest in the west coast.

Pier 66 offers a spectacular panoramic view of the waterfront at sunset.

The waterfront is busy at night and parking is easy to find along the street. I explore this area at night, but do not stray too far from it, as I didn’t feel safe.

A short stroll further from Pike Place Market, the Space Needle Seattle Centre comes into view. Sitting at 605 feet tall, the elevator goes up 520 feet to an open-air deck, revealing the Ranier, Olympic and Cascades mountain ranges on a clear day. 500 feet up is an observation level and features a revolving glass floor revealing buildings right under your feet!

Obviously, it costs to go up there, so if you want a budget-friendly observation deck experience, keep reading. 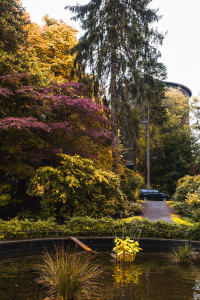 The Water Tower is located in Volunteer Park, which holds a lake, conservatory and museum. I’m not a huge museum fan, so I opt not to visit, but that park itself is worth an explore. The Water Tower Observation Deck is not as tall as the Space Needle; it’s a wide cylinder building with red bricks, with an entrance reminiscent of neoclassical architecture. A narrow flight of stairs guides you to the top. The windows are wired, which obstructs the beautiful view a bit, but it’s easy to put your camera lens through the gaps and take great photos. The Seattle skyline with the Space Needle is in complete view! 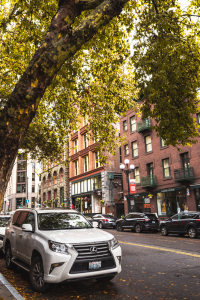 I love this area of Seattle. It’s a large version of the Historic Distillery in Toronto or Gastown in Vancouver with the cobblestone streets and string lights and beautiful, historic vibe. This is where the men rasp at me to ‘come here’. I sit in Pioneer Square’s Café Umbria with a mocha and inhale the smell of a homeless man as he sleeps with his head on a table near me. Pioneer Square is lined with many shops, cafes and beautiful buildings that will keep you occupied for a few hours at least. 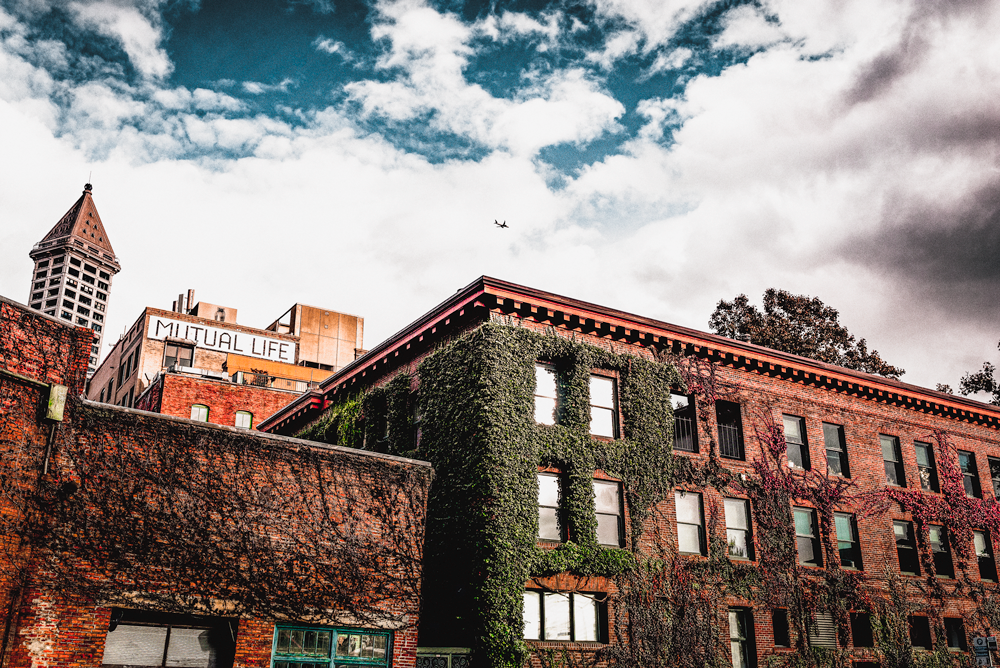 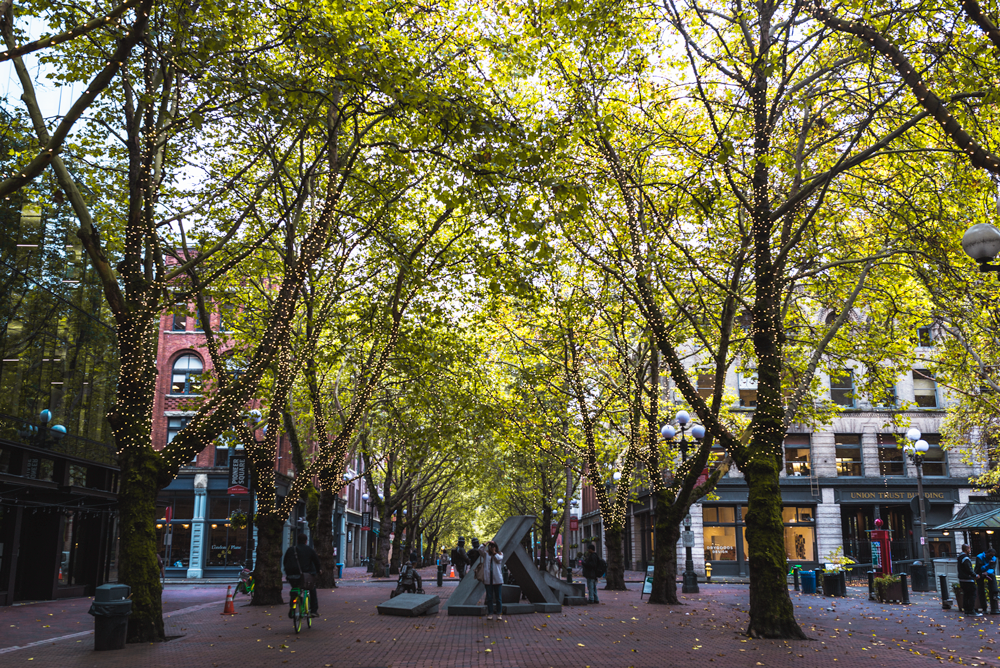 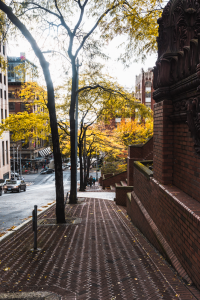 The walk to the Seattle Central Library from Pioneer Square says two hours on Google Maps, but I swear it takes me 40 minutes. It’s an uphill walk. At one point I walk through an area prominent in homelessness to arrive to the library. There are many addict men hanging around and one is in the middle of the intersection screaming. What really freaks me out is the tent I’m going to walk past once I cross the street. Sure enough, as I approach the tent, a man from inside murmurs something and my heart jumps to my throat. I pick up my pace and walk out of 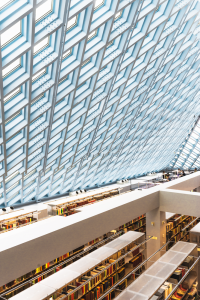 that area quickly. After that, it’s a short while to the library. There is a huge sign in the front and the Rem Koolhaas and Joshua Prince-Ramus designed architecture is eye-catching.

The library is beautifully built – and packed. Upon entrance, there is a long set of escalators and a movie theatre room playing a movie. The floors sections are signed with what they cater to. There is even a red floor. I’d definitely take a book and cozy up to read here.

For the best Seattle skyline view, head to Kerry Park. It’s a popular spot that has other photographers and tourists, especially during sunset. 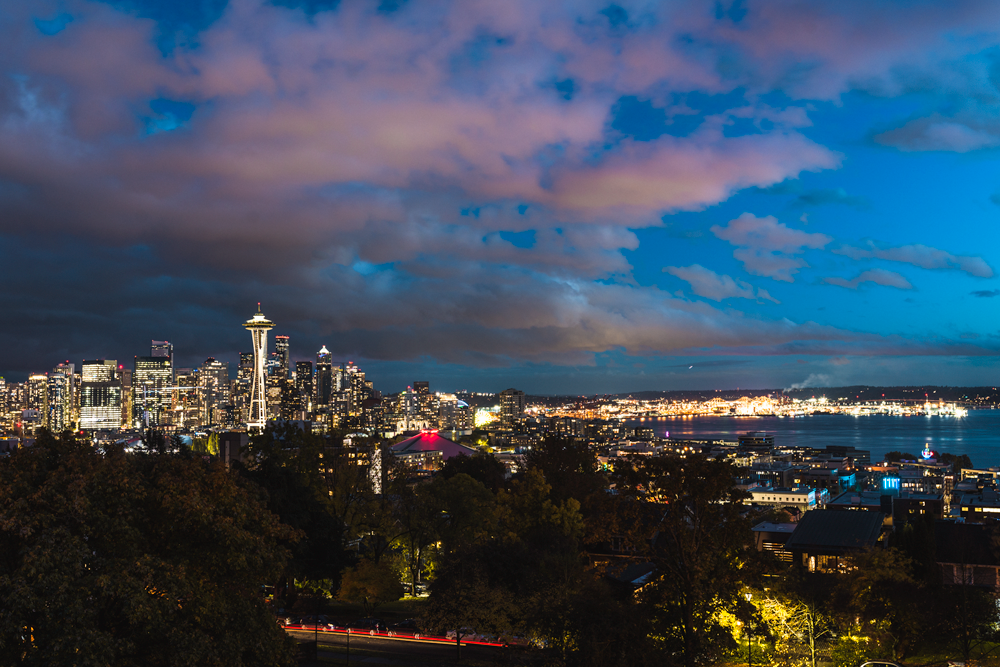 In the summer there are picnic tables available on a first-come, first-serve basis. 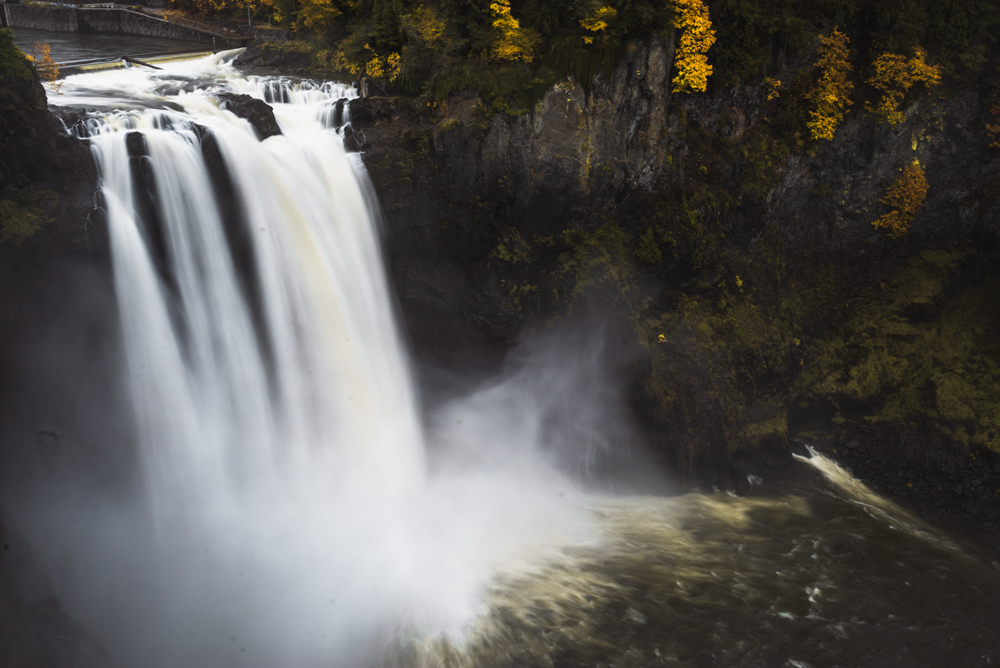 The Museum of Pop Culture (MoPOP) is spectacular despite me saying I'm not a museum fan. It’s in a hip/trendy area of Seattle and has a unique design which is intriguing. It is a non-profit dedicated to contemporary popular culture and is founded by Microsoft co-founder, Paul Allen. MoPOP’s exhibitions are relatable to anyone living in the modern era. I guarantee there is at least one exhibition of interest to anyone looking to learn more on American pop culture. 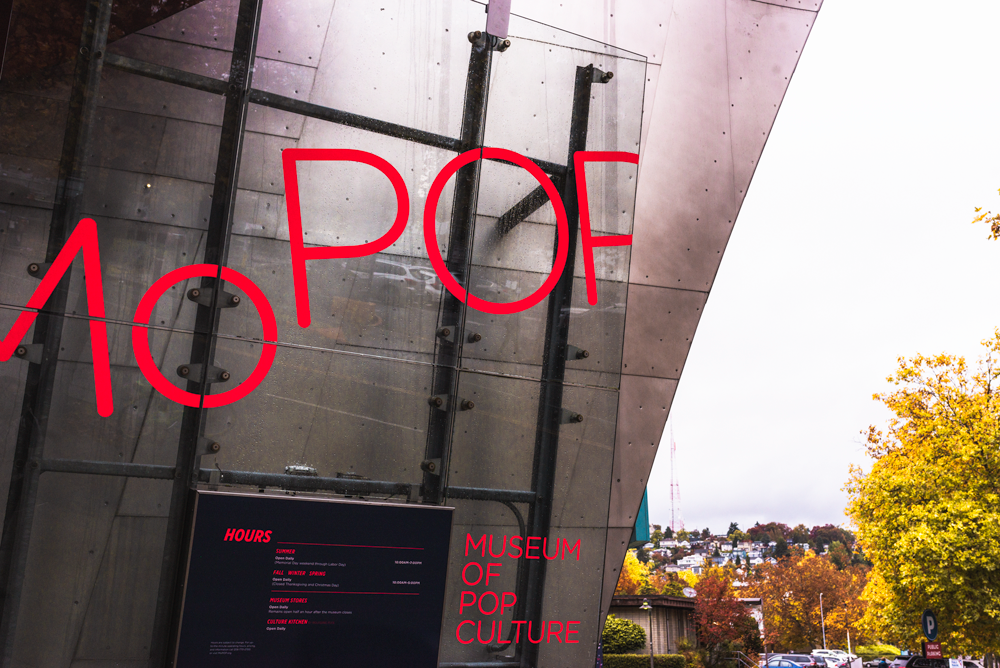 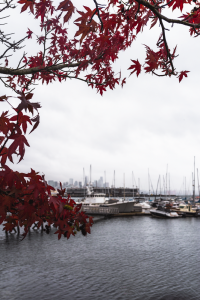 If you’re in the mood for a marine backdrop and a restaurant by the water, Smith Cove is the perfect spot. The fall drive there is beautiful. It’s close to Seattle’s downtown core and offers a calm, relaxed atmosphere where you can wind down and take in the skyline of Seattle.

There you have it. I highly recommend a car to move around easily, and especially for a day trip to Snoqualmie Falls. I did, however, maintain an 8pm curfew for myself since at nighttime, the crackheads, prostitutes and God knows what else emerges, that I do not want to witness. One night I do walk around late and I'm paranoid about the things I see. I think all the people I see out late are dealing drugs (lol). Unless you’re with someone, I don't recommend staying out at night on your own as a solo female. Unless that’s your scene of course.

Sorry, the comment form is closed at this time.