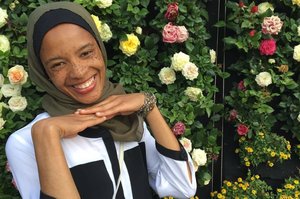 Posted at 21:23h in Uncategorized by Samah 0 Comments
0 Likes
Share

As human beings, we tend to categorize to understand other humans better.

Our experiences and reality are shaped by our gender, race and religion (or lack of). They are also shaped by how others perceive these attributes and treat you—covert biases, stereotypes and judgments on how you should be if you are of a certain race or gender or religion.

Over the years, the heated debates and controversies surrounding the Muslim woman’s headscarf (hijab) has continuously appalled me. Among the heated outbursts from feminists and angry opinions from men, all with varying opinions, the Muslim woman’s voice was drowned by people who think they know better. National laws on what she gets to wear have been made on her behalf under the guise of liberation and secularism (ahem, France). A genuine secular state would not incorporate religion in its organization of time, meaning holidays like Christmas or Easter Monday would no longer be mandatory nation-wide holidays. As this still occurs, it’s futile to enforce the country’s secular notion. People usually point fingers at other countries dictating women’s clothing as well. I won’t get into the hypocrisy of certain countries, but they do ‘claim’ to follow Sharia (Islamic law), which does require men and women to be covered accordingly: navel to over the knees for men and wrist to ankles and hair for women (*gasp* the inequality!). In fact, France and some Islamic countries share the same sentiment when it comes to Muslim women and their clothing. France, instead, will hold pepper spray to a woman’s face until she removes her clothing and fine her or send her home from school if she’s wearing a long skirt. Women can’t be too covered apparently.

Muslim women’s clothing has been used to drive votes and influence politics. Now that it’s synonymous with female enslavement and oppression, it has been used to show how Islam has all of a sudden (well since 9/11 actually) become incompatible with the newfound freedom in some nations. Freedom that came after the colonization and exploitation of Islamic regions and how the French empire (I don’t mean to scapegoat France, but they lend themselves a good example) enforced the French culture onto North African countries like Morocco, Algeria and Tunisia, and left them poor, but the French resource rich. Because of this, France’s constant ‘when in Rome’ spiel is sanctimonious. You can’t have your cake and eat it too, France.

I wanted to write about a scarf-wearing Muslim woman who was living life on her own, dealing with everyday issues and just going through life. And what better person than Kareemah Ashiru, a Nigerian born, American raised solo female traveler, who I relate to as a solo traveling Muslim female as well. Sometimes it’s mentally exhausting to go on social media and see whenever a Muslim woman is mentioned, it’s in the context of a political issue. The media spends way too much time talking about Muslim women and politics, at least here in Canada. We didn’t ask for this.

Much like myself, Kareemah’s ambitions to discover herself and contribute to society came early. She took the plunge in 2015, her first solo flight being to Madrid, Spain, where she went to the University of Toledo and looked forward to improving her Spanish. It wasn’t easy, convincing her parents to do a solo trip. But, her parents trusted her decisions and had faith in God to keep her best interests at heart.

She rented an apartment, immersed in Madrid’s liveliness. Spain came with perks. It was different from the USA—the pace of life was slower, the people friendlier and the food was super healthy.

However, being a Muslim in Spain isn’t always easy. Majority of the food contains ham, which is impermissible to eat in Islam. Wearing a hijab and finding working possessed a challenge in Spanish society. Kareemah worked harder than her American acquaintances to find a job. Spaniards had a hard time equating a hijab-wearing Muslim to an American. To some, Kareemah just had to be Moroccan for their comfort. Her experience isn’t isolated; it’s one most racialized people can relate to. At the Riyadh airport, I had a Saudi Arabian security official ask where I was really from, after looking at my Canadian passport. I’m born and raised in Toronto.

Many might think well take just your scarf off and live freely, but that’s a simplistic way to perceive it and it’s not quite like removing a sweater when the weather gets hot. It doesn’t address the main issues—1. Who’s dictating what freedom conceptualizes to in reality? In a ‘secular’ society, morals are constantly changing. What is considered freedom today may be considered oppressive in a few more decades. Do you find the mandatory covering of genitalia oppressive? Some do. 2. Telling a woman to remove her clothing to live, in your perspective, free is as oppressive as it gets. Why is a woman wanting to follow her religion and dress modestly so unfathomable?

Besides job hunting obstacles, Kareemah recalls one negative experience in Austria, while she rode the train. Her backpack was taking up space. She moved it to let a lady sit down. The lady, instead, snickered and said something in a foreign language to her friends. They chuckled. What they said wasn’t too understandable, but Kareemah made out the word ‘bomb’ in their conversation.

As interesting as solo travel is, there are times when it can bring an onslaught of loneliness. During the holidays, when you return to your hotel or Airbnb at night or while a hike or other solo activity. Kareemah usually writes about her travel experiences in her journal, calls her siblings or friends, or tries to meet up with other travellers or even locals.

With most things in life, the good always outweighs the bad. Travel is eye-opening and enjoyable, and you’ll meet many friendly people. For Kareemah, the good came with learning Spanish and easily communicating with Spaniards. The good was encountering a Turkish lady who helped her navigate the streets of Istanbul. She takes these as an opportunity to show people the Islam she grew up knowing—just simply being kind, from one fellow human to another.

She’s accomplishing her goals to give back and develop herself. Her travels lead her to develop her blog, Hijabi Globetrotter, where she highlights Islamic-friendly options on having a good time in Spain, its Islamic history and connecting Muslims who plan to visit the country. She successfully learned Spanish and began to understand herself on a deeper level; what she likes and dislikes and her breaking points. She has a newfound appreciation for her family and the blessings she didn’t initially realize. The growing confidence in her abilities and learning how to mentally and physically take care of herself.

Keeping up with Religion

Although not strict on sticking to a zabiha diet, which means not being particular about eating meat slaughtered according to the Islamic ritual, Kareemah stays on the lookout for halal food options for her blog’s Muslim audience. As some countries don’t always have halal options, Kareemah sometimes opts for kosher foods instead, citing that for her, it’s okay to eat foods consumed by ‘people of the book’ i.e. Christians and Jews. Furthermore, it’s important to stick to the five daily prayers that Muslims are required to pray. This means scouring for a prayer spot, which sometimes ends up being in the car. It also means partaking in activities permissible in Islam so opting out of drinking and clubbing events.

Kareemah’s advice for those wanting to solo travel? Don’t be afraid.

It was one of the best life decisions she’s ever made. Not everyone is going to be comfortable with the idea. If you want to start, but don’t know how, she advises with traveling alone in your city, or eating alone in a restaurant. This will sound nerve-racking to many people, but with time, it’s easy to get used to. Sometimes, we need to learn how to spend time with ourselves. For fellow Muslim women who find it hard to convince their parents, try traveling with a group of other Muslim women. They might be more open to that idea. There is a group on Facebook for this. It’s called Muslimahs Who Travel. She wishes everyone the best of luck and happy travels.

Kareemah’s story highlights the reality of many Muslim women who want to maintain Islam in their daily life. Although a part of it, the headscarf is a fraction of what Islam is composed of—there’s a lot to the religion, and Islamic scholars still find out new details and information to this day. The scarf isn’t unique to Muslim women, nor is it a symbol of inequality between men and women. There are deeper global concerns that are better exemplifications of that issue and men and women have always worn different clothing. Quite frankly, the media’s narrative about “liberating Muslim women from the shackles of Islam so they can live ‘free’ like women in western countries” needs to be dismantled—it only furthers the euro-centric standards that are seemingly imposed around the world. If a woman goes about her daily life dressed, in her view, modestly, then let her be. Her actual ‘freedom’ isn’t something to be concerned about.